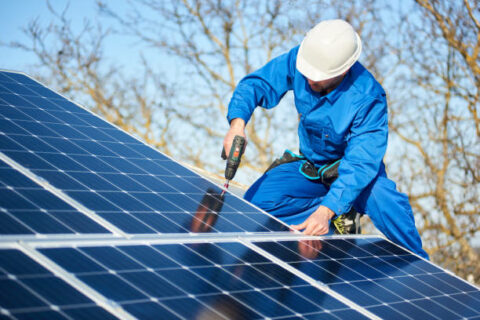 Seeking a “green job”​? Your best shot is likely to be in nontraditional areas

Ryan Bird never set out to join the green economy. As a college student in the late 1990s, he made a beeline into sales, pitching Kirby vacuum cleaners door-to-door. Sales became his calling, including a long stint selling industrial equipment to the likes of Coca-Cola and Nestle.

But when recruiters from clean-energy companies started calling a few years ago, Bird couldn’t say no. First he sold fuel cells for a couple years. And now he’s a sales manager for Genie Solar Energy, focusing on mid-sized commercial accounts.

“We’ve got a great growth path,” Bird says. Potential corporate customers are eager to protect the environment and improve their standing with customers. Government incentives help, too. Genie Solar is hiring for sales and marketing roles, he says, and candidates “are coming in from all kinds of other fields.”

Such career journeys are unfolding throughout the environmental sector of the U.S. economy. There’s always core demand for people with deep expertise in sustainable technologies. But new data from LinkedIn’s Economic Graph team finds that the most abundant opportunities now involve one-time outsiders like Bird.

Some 9.5 million people already work in the United States’ green economy. And — as the chart below shows — opportunities keep expanding. That means employers are hungry for non-traditional expertise in areas ranging from customer service to risk management and forklift operations. (As business booms, someone needs to keep warehouses running properly.)

The key takeaway: for every traditional green job posting last year, there were 2.6 non-traditional postings. Being able to support the overall business success of a green enterprise doesn’t necessarily require a degree in environmental science; lots of other pathways work, too.

Customer service, for example, is an in-demand role at enterprises ranging from electric-vehicle producers to environmental consulting firms. People who previously worked at Fed Ex or Starbucks may already have some of the communication and customer-outreach skills needed for such roles. Even animal hospitals are creating customer-service roles with a green twist, as they focus on ways to support habitat restoration and wildlife management.

Meanwhile, people with experience in regulatory compliance often find work with state and local government departments that might interact with environmental rules. Even specialties such as economic development need to be mindful of environmental compliance issues, too — which creates roles for people who can add some green skills to the mix.

These sorts of non-traditional job postings in the green economy typically average 2.5 to 2.9 explicit green skills such as sustainability, renewable energy and recycling.

Some also call for familiarity with U.S. regulatory agencies such as the Environmental Protection Agency (EPA) or the Occupational Safety & Health Administration (OSHA). But their greatest demands typically involve non-green skills such as communication and customer service.

By contrast, traditional green-sector jobs — such as energy analyst or geologist – typically call for at least three or four explicit green skills. LinkedIn data shows rapid growth of job postings in a few of these fields, but also relatively flat job-listing trends in others.

At universities with strong environmental-science programs, such as the University of Colorado, Boulder, the full spectrum of traditional employers remain visible at career events. This spring’s lineup includes the likes of Jacobs Engineering, the Denver Zoo, the EPA and Nude Foods Group.

Yet the doors to a green career remain wide open for people pursuing more accidental paths, too. In New Jersey, Cameron Estanislau graduated from Rowan College last year with a degree in supply-chain management. He dropped initial plans to help manage an Amazon fulfillment center — in favor of taking a shot at residential sales for Suntuity Solar.

“I really like it,” Estanislau says. “This is a product I care about, and the commissions are great.” Earning $50,000 a year is very much within reach, he says, which is quite appealing for a first full-time job out of college.

Green job postings are job postings explicitly requiring green skills. This analysis looks at the percentage of open jobs listed on LinkedIn that required green skills in the first quarter of 2021, and how this share grew in 2020 compared to the year before. We also quantify the average number of green skills required for each job, and we rank these skills by frequency.

Helpful Hints and Other Support Resources